Thermoelectric cooling uses the Peltier effect to create a heat flux between the junction of two different types of materials. A Peltier cooler, heater, or thermoelectric heat pump is a solid-state active heat pump which transfers heat from one side of the device to the other, with consumption of electrical energy, depending on the direction of the current. Such an instrument is also called a Peltier device, Peltier heat pump, solid state refrigerator, or thermoelectric cooler (TEC). It can be used either for heating or for cooling, although in practice the main application is cooling. It can also be used as a temperature controller that either heats or cools.

This technology is far less commonly applied to refrigeration than vapor-compression refrigeration is. The primary advantages of a Peltier cooler compared to a vapor-compression refrigerator are its lack of moving parts or circulating liquid, very long life, invulnerability to leaks, small size, and flexible shape. Its main disadvantages are high cost and poor power efficiency. Many researchers and companies are trying to develop Peltier coolers that are cheap and efficient. 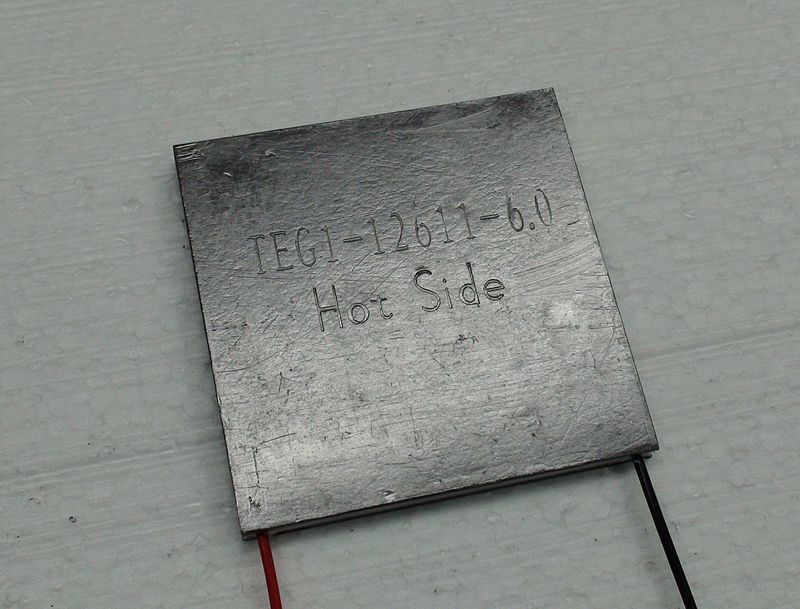 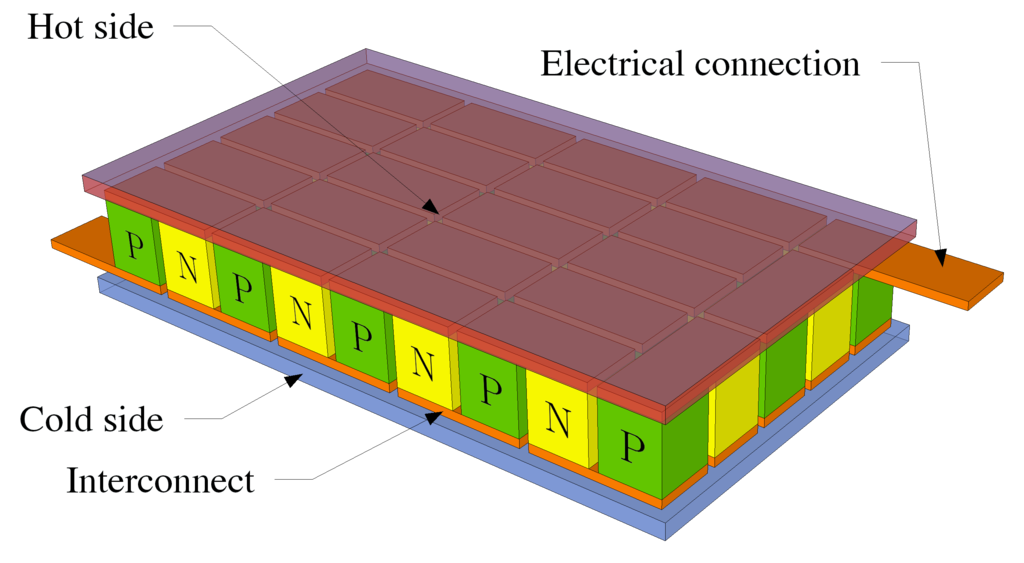 Peltier element schematic. Thermoelectric legs are thermally in parallel and electrically in series.

Thermoelectric coolers operate by the Peltier effect (which also goes by the more general name thermoelectric effect). The device has two sides, and when a DC electric current flows through the device, it brings heat from one side to the other, so that one side gets cooler while the other gets hotter. The "hot" side is attached to a heat sink so that it remains at ambient temperature, while the cool side goes below room temperature. In some applications, multiple coolers can be cascaded together for lower temperature.

Two unique semiconductors, one n-type and one p-type, are used because they need to have different electron densities. The semiconductors are placed thermally in parallel to each other and electrically in series and then joined with a thermally conducting plate on each side. When a voltage is applied to the free ends of the two semiconductors there is a flow of DC current across the junction of the semiconductors causing a temperature difference. The side with the cooling plate absorbs heat which is then moved to the other side of the device where the heat sink is. Thermoelectric Coolers, also abbreviated to TECs are typically connected side by side and sandwiched between two ceramic plates. The cooling ability of the total unit is then proportional to the number of TECs in it.

Some benefits of using a TEC are:

Some disadvantages of using a TEC are:

A single-stage TEC will typically produce a maximal temperature difference of 70 °C between its hot and cold sides. The more heat moved using a TEC, the less efficient it becomes, because the TEC needs to dissipate both the heat being moved and the heat it generates itself from its own power consumption. The amount of heat that can be absorbed is proportional to the current and time. The Peltier coefficient depends on temperature and the materials the TEC is made of.

In refrigeration applications, thermoelectric junctions have about 1/4th the efficiency compared to conventional means (they offer around 10–15% efficiency of the ideal Carnot cycle refrigerator, compared with 40–60% achieved by conventional compression-cycle systems (reverse Rankine systems using compression/expansion).) Due to this lower efficiency, thermoelectric cooling is generally only used in environments where the solid-state nature (no moving parts, low maintenance, compact size, and orientation insensitivity) outweighs pure efficiency. 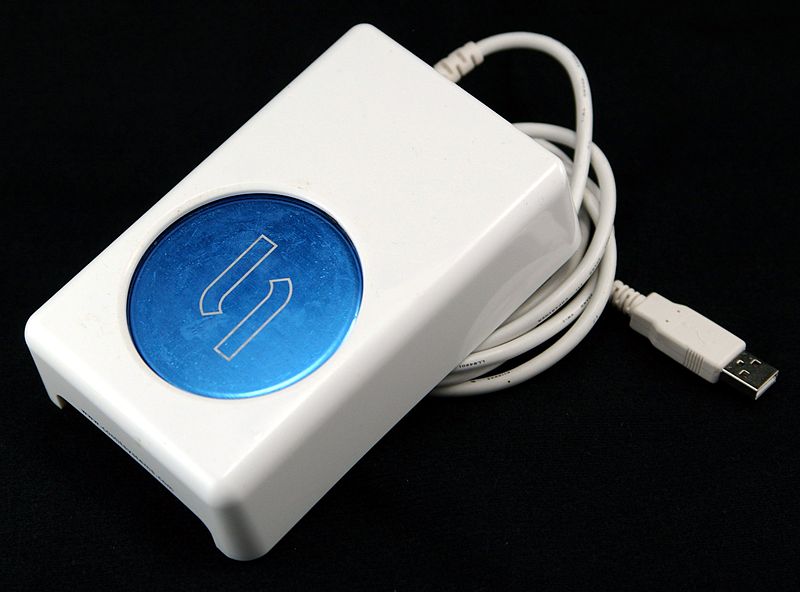 Thermoelectric coolers are used for applications that require heat removal ranging from milliwatts to several thousand watts. They can be made for applications as small as a beverage cooler or as large as a submarine or railroad car. TECs have limited life time. Their health strength can be measured by the change of their AC resistance (ACR). When a TEC gets "old" or worn out, the ACR will increase.

Peltier elements are commonly used in consumer products. For example, Peltier elements are used in camping, portable coolers, cooling electronic components and small instruments. The cooling effect of Peltier heat pumps can also be used to extract water from the air in dehumidifiers. A camping/car type electric cooler can typically reduce the temperature by up to 20 °C (36 °F) below the ambient temperature. Climate-controlled jackets are beginning to use Peltier elements. Thermoelectric coolers are used to augment heat sinks for microprocessors. They are also used for wine coolers.

Thermoelectric coolers are used in many fields of industrial manufacturing and require a thorough performance analysis as they face the test of running thousands of cycles before these industrial products are launched to the market. Some of the applications include laser equipment, thermoelectric air conditioners or coolers, industrial electronics and telecommunications, automotive, mini refrigerators or incubators, military cabinets, IT enclosures, and more.

Peltier elements are used in scientific devices. They are a common component in thermal cyclers, used for the synthesis of DNA by polymerase chain reaction (PCR), a common molecular biological technique, which requires the rapid heating and cooling of the reaction mixture for denaturation primer annealing and enzymatic synthesis cycles.

With feedback circuitry, Peltier elements can be used to implement highly stable temperature controllers that keep desired temperature within ±0.01 °C. Such stability may be used in precise laser applications to avoid laser wavelength drifting as environment temperature changes.

The effect is used in satellites and spacecraft to reduce temperature differences caused by direct sunlight on one side of a craft by dissipating the heat over the cold shaded side, where it is dissipated as thermal radiation to space. Since 1961, some unmanned spacecraft (including the Curiosity Mars rover) utilize radioisotope thermoelectric generators (RTGs) that convert thermal energy into electrical energy using the Seebeck effect. The devices can last several decades, as they are fueled by the decay of high-energy radioactive materials.

Photon detectors such as CCDs in astronomical telescopes, spectrometers, or very high-end digital cameras are often cooled by Peltier elements. This reduces dark counts due to thermal noise. A dark count occurs when a pixel registers an electron caused by thermal fluctuation rather than a photon. On digital photos taken at low light these occur as speckles (or "pixel noise").

Thermoelectric coolers can be used to cool computer components to keep temperatures within design limits or to maintain stable functioning when overclocking. A Peltier cooler with a heat sink or waterblock can cool a chip to well below ambient temperature.

Some electronic equipment intended for military use in the field is thermoelectrically cooled. 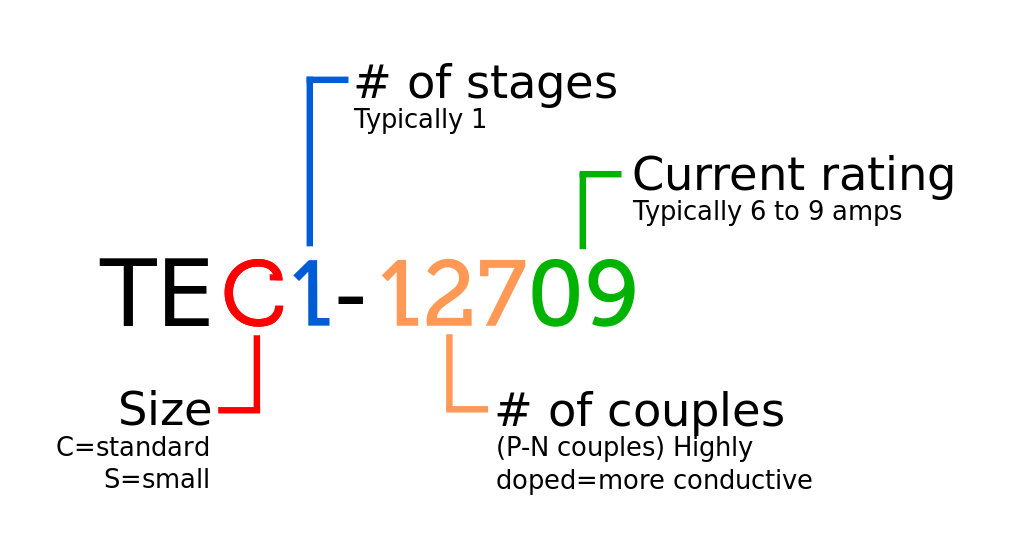 Peltier elements all conform to a universal identification specification

The vast majority of TECs have an ID printed on the cooled side.

These universal IDs clearly indicate the size, number of stages, number of couples, and current rating in amps, as seen in the adjacent diagram.