A Video Graphics Array (VGA) connector is a three-row 15-pin DE-15 connector. The 15-pin VGA connector was provided on many video cards, computer monitors, laptop computers, projectors, and high definition television sets. On laptop computers or other small devices, a mini-VGA port was sometimes used in place of the full-sized VGA connector.

Few new devices now include VGA connectors, and it generally coexists with DVI or the newer and more compact HDMI and DisplayPort interface connectors. 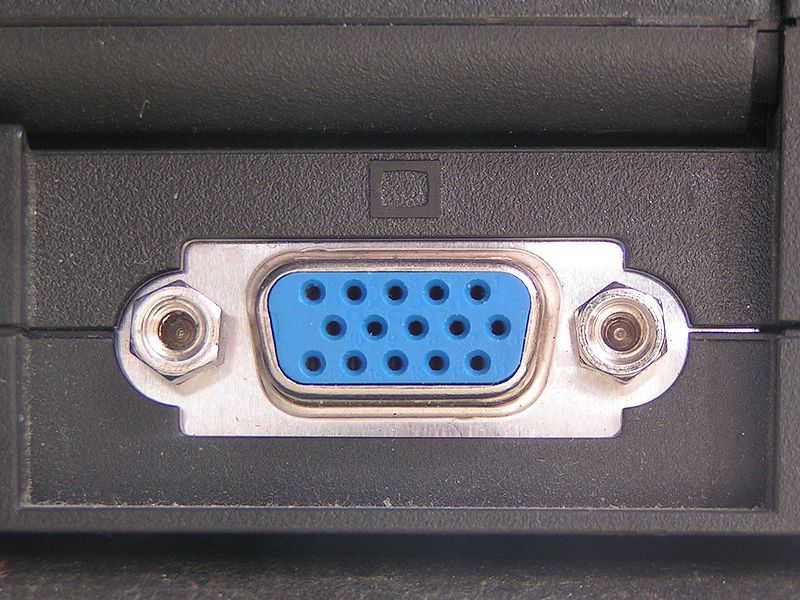 A female DE-15 output in a laptop computer.

The original IBM PS/2 defined different signals assignments. The IBM 8513 monitor defined pin 5 as "Self Test", which displays a white screen when the cable is disconnected (the pin is not connected to ground).  The IBM PS/55 Display Adapter defined pin 9 as "+12V".  It turns on the specific monitor when the system unit is powered on. In the PS/2, pin 9 was keyed by plugging the female connector hole; this prevented non-VGA 15 pin cables from being plugged into a VGA socket.  Four pins carried Monitor ID bits, which were rarely used; VESA DDC redefined some of these pins and replaced the key pin with +5 V DC power supply. Devices that comply with the DDC host system standard provide 5 V ± 5% and supply a minimum of 50 mA to a maximum of 1 A.

The VGA interface is not engineered to be hot-swappable (i.e. the user cannot connect or disconnect the output device while the host is running), although in practice this can be done and usually does not cause damage to the hardware or other problems. However, nothing in the design ensures that the ground pins form the first make or the last break in the connection, so hot-swapping may introduce surges in signal lines that may or may not be adequately protected against damage. Also, depending on the hardware and software, monitor detection is sometimes unreliable when hot-plugging a VGA connection.

DE-15 has been conventionally referred to ambiguously as D-sub 15, incorrectly as DB-15 and often as HD-15 (High Density, to distinguish it from the DE-9 connector used on the older CGA and EGA cards, as well as some early VGA cards, which have the same E shell size but only two rows of pins). The video connector is an "E" size D-sub connector, with 15 pins in three rows, which is the high-density connector version (DE15HD). 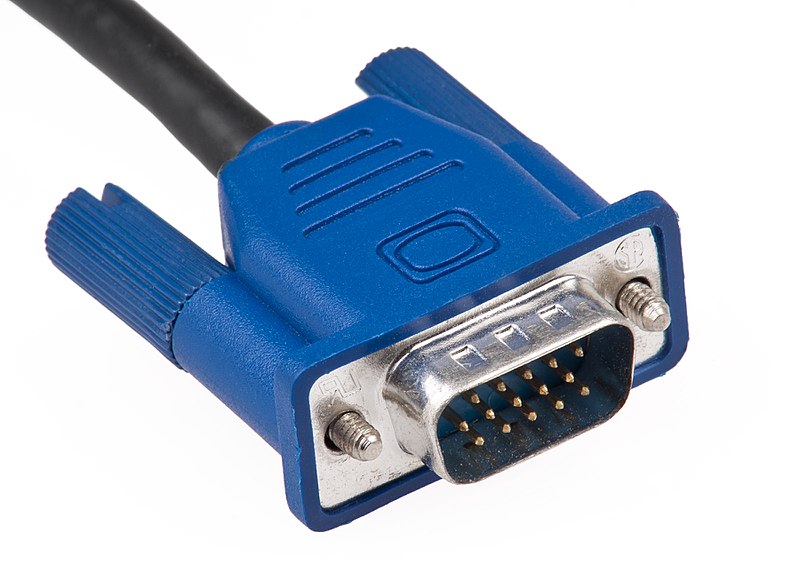 The same VGA cable can be used with a variety of supported VGA resolutions, ranging from 320×400px @70 Hz, or 320×480px @60 Hz (12.6 MHz of signal bandwidth) to 1280×1024px (SXGA) @85 Hz (160 MHz) and up to 2048×1536px (QXGA) @85 Hz (388 MHz). There are no standards defining the quality required for each resolution but higher-quality cables typically contain coaxial wiring and insulation that make them thicker. Shorter VGA cables are less likely to introduce significant signal degradation. A good-quality cable should not suffer from signal crosstalk, whereby signals in one wire induce unwanted currents in adjacent wires, or ghosting. Ghosting occurs when impedance mismatches, 75 ohm (Ω) by the specification, cause signals to be reflected. However, ghosting with long cables may be caused by equipment with incorrect signal termination or by passive cable splitters rather than the cables themselves. 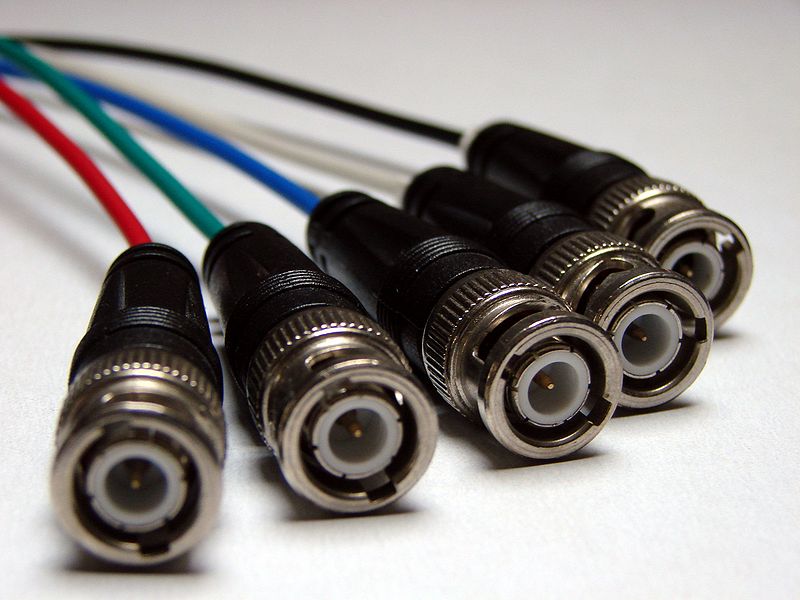 Some high-end monitors and video cards featured 5 separate BNC connectors for RGBHV signals, allowing highest quality connection using five 75 ohm coaxial cables. Within a 15-pin connector, the red, green, and blue signals (pins 1, 2, 3) cannot be shielded from each other, so crosstalk is possible within the 15-pin interconnect. BNC prevents crosstalk by maintaining full coaxial shielding through the circular connectors, but the connectors are very large and bulky. The requirement to press and turn the plug shell to disconnect requires access space around each connector to allow grasping of each BNC plug shell. Supplementary signals such as DDC are typically not supported with BNC.

Some laptops and other small devices use a 2-row mini-VGA connector that is much smaller than the 3-row DE-15 connector or 5 separate BNC connectors.

There are DVI to VGA adapters and cables. As neither DVI nor VGA carry audio channels, a separate path for audio should be used, if needed. Simple adapters from other modern outputs such as HDMI to VGA are also commonplace, again requiring a separate audio path.

To connect VGA outputs to interfaces with different signaling, more complex converters may be used. Most of them need an external power source to operate and are inherently lossy. However, many modern displays are still made with multiple inputs including VGA, in which case adapters are not necessary.

VGA to SCART converters can pass color information, because VGA — SCART RGB signals are electrically compatible, except for synchronization. Many modern graphics adapters can modify their signal in software, including refresh rate, sync length, polarity and number of blank lines. Particular issues include interlace support and the use of the resolution 720×576 in PAL countries. Under these restrictive conditions, a simple circuit to combine the VGA separate synchronization signals into SCART composite sync may suffice.

A VGA Extender is an electronic device that increases the signal strength from a VGA port, most often from a computer. They are often used in schools, businesses, and homes when multiple monitors are being run off one VGA port, or if the cable between the monitor and the computer will be excessively long (often pictures appear blurry or have minor artifacts if the cable runs too far without a booster). VGA extenders are sometimes called VGA boosters.

Newer video cards often do not have a VGA output. The DVI-I output, which still contains an analog VGA-compatible signal, is often also omitted. Therefore, if the user intends to connect a monitor or projector that features only a VGA input, the user usually will need to facilitate use of an active converter that receives digital signal from a DVI-D or HDMI or DisplayPort connector and changes it into analog suitable for VGA. Only older series of video cards and motherboards (for use with an integrated GPU) may still have a VGA or DVI-I connector available.